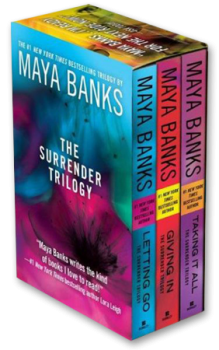 I think I may have stumbled upon this romance “crack” I keep hearing about, because I could not stop  reading these.

The books in this series are about  Dominant / submissive relationships*.The series main characters are three close friends with each woman getting their own book. We start with widowed Joss , move to  her sister-in-law Kylie and then finally their friend Chessy.

The first book really did not work for me. On the 5th anniversary of her husband’s death, Joss decides it’s time to say goodbye and seek out the  Dominant/ submissive relationship she’s secretly always wanted, but her husband could never give her because of his abusive childhood. To her surprise, she finds her dream relationship in her husband’s best friend Dash.

After not liking Letting Go, I only got Giving In because the sample in the back intrigued me. This one is about Kylie who is Joss’ sister-in-law and comes from the same abusive past as Joss’ dead husband.  This has made her “prickly and bitchy” as her friends say but Jensen, the new man in her office sees potential in her both romantically and professionally. I liked this one more, because there was more conflict. Jensen is a Dominant too but he has to give up that side of him for Kylie to feel safe. We also learn he has his own traumatic past, so they have to work together to figure out how to have a relationship. Although once again this dream thing comes up as the climax again and it’s even worse in this one than the first one. – ★★

Now, I read this last one because there is a hint of something going on with Kylie and Joss’ friend Chessy in the background of the other two books and I wanted to see how that was going to be resolved. This book was by far better than the others because the issues going on between Chessy and her husband Tate had higher stakes because they are considering ending a marriage.I felt like this book has the most struggle and conflict. Also, Chessy and Tate are more ingrained in the Dominant/ submissive lifestyle so we see more about what these relationships entail. – ★★★

There were a  couple of things in this book I had to get past , the writing in these books left a lot to be desired. A lot of the time characters would use the same phrasing like how I’m pretty sure every character tells Chessy that Tate would “move heaven and Earth” for her. They all say it just like that and it feels really unnatural

This was all my first introduction to the CARETAKER ALPHA MALE and omg, these guys are all extreme alphas. If you so much as trip in a restaurant parking lot they will drive you to their mansions, give you their beds and make breakfast in the morning. This I’m learning is a common trope in romance so if you like the rich, successful guys who take care of their ladies this book has all kinds. It does leave me wondering how in NA turned this trope got turned into the jerk alpha with a heart of gold.

Overall I’d skip the first two, but without those you don’t get the building tension of the third books. So I’d recommend the last two

*This capital D dominant and lowercase submissive is the style the book uses so when in Rome….

A spin-off of Books and Sensibility, this blog was created in 2015 to talk exclusively about romance novels--From the first page to HEA !